Well we are at that time of year again when companies lose millions of dollars from their workers who are filling out office pools and trying to watch the games at all hours of the day.Â  There are also the people that don’t even mess around with coming to work and call in sick on Friday, so that they can watch the games.Â  Starting at about 12:42 there will be almost continuous basketball coverage until midnight or later.Â  Then it will start all over again tomorrow.Â  Then it will continue on Saturday and Sunday.Â  Then everybody comes back to work on Monday to see where they are in their pools….

Of course I am talking about the NCAA Men’s College Division I Basketball Tournament.Â  This is one of the best times of the year.Â  It is also a sad time because I know that in a couple of weeks I will no longer be able to watch college basketball and the only thing that will be on will be baseball, and this bores me to stone.

I am not a North Carolina fan at all.Â  I honestly took some heat from my wife because she is a true blue Dukie.Â  We have a basketball signed by Coach K, as well as a basketball signed personally to her from Dick Vitale, another ball signed by the entire team the last time they won the Championship…I could go on and on.Â  But I won’t.Â  I like Duke, but at the same time they are second (sometimes third)Â on my list.Â  I have been an IU fan since I was a little boy, and my dadÂ has always beenÂ an IU fan as long as I can remember.Â  So for me to pick a first round IU loss is not something that I am looking forward to tomorrow night.Â

So here is my bracket for the tournament.Â  I will probably hit BW-3’s tomorrow for a few hours and watch the games.Â 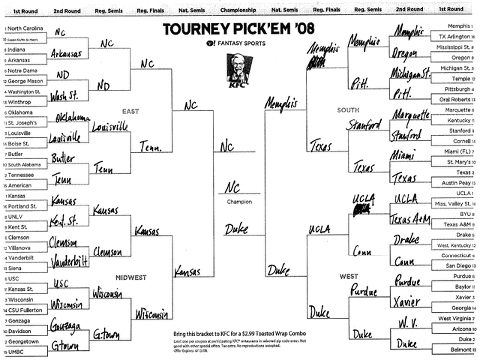