Hahaha…I watched one of my favorite shows this weekend and that is Bizarre Foods with Andrew Zimmern on the Travel Channel.Â  If you have never seen this show I would highly recommend it just for the chance to listen to his comments on some of the most bizarre foods on the planet.

I have been watching this show since it started airing, so of course I have been waiting for the opportunity to see Andrew finally meet his defeat.Â  Not that I don’t want him to succeed, but I have seen him eat all kinds of things and never admit to the fact that he just couldn’t get that down.Â  So enter the “House of Stink” in Taiwan.Â  This was a tofu making restaurant that also had the “thousand year old eggs” with tofu and scallions.Â  Mmmm… I know you are all thinking that this has to be on the stop next year when I visit Taiwan.Â  It was pretty bad when he thanked the owner and admitting to her being the only place where he was not able to actually eat the “food.”

So for my comment section I would like to know what is the most bizarre food that you have ever eaten.Â  I have had some pretty tame stuff compared to Andrew, but eel, squid, and alligator are probably the most outlandish for me. 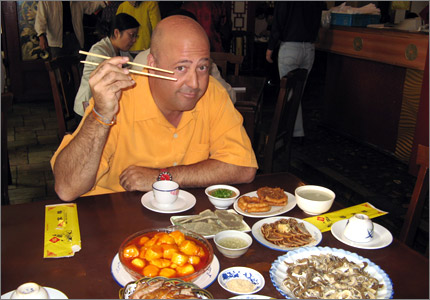 « Back on track and running full steam ahead…Moment in time… »